The Righteous Kingdom of Ulver 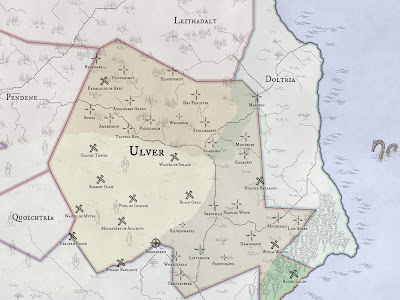 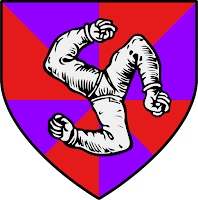 A brief history of the past five centuries…
5068 – Empress Lena Víborg's family is killed when she is a child, and she swears vengeance upon their assassins, the elves. Over the next century, they will be exiled from Ulver.
5080 – The Arcane Council announces land grants to settlers in Ulver's remotest shrubland. Halfling immigration surges.
5127 – Emperor Thorvald Víborg-Amsel survives a series of assassination attempts, ultimately turning to necromancy to prolong is life.
5184 – Ulver beomes a democracy after the destruction of lich-king Thorvald.
5281 – The Senate commissions hundreds of miles of defensive earthworks at Ulver's borders in preparation for war with Doltria.
5283 – The Second Ulver-Doltria War begins. Before its end in 5289, over one hundred thousand soldiers will die, and the economic fallout of this event will be felt for the next century.
5306 – The hero who would come to be known as Thelrin is born in Dendemir village.
5313 – Thelrin the Justicar loses an eye to a night hag.
5313 – King Warmund Gorney claims the gods have bequeathed the divine right of rulership to his family and his family alone, and establishes a monarchy.
5328 – Thelrin the Justicar is written of no more in Ulver.
5444 – Thomais's fortunes change when he finds a great treasure, long thought lost.
5446 – Thomais Tomlinson’s philanthropic gifts fund the sky bridge and the New College of Sorcery in Aggleston.
5556 – Using a trade dispute as an excuse, Ulver invades and annexes Doltria in a fast-paced campaign called The War of Seven Weeks.
5580 – Doltria declares independence from Ulver. War ensues.
5586 – Current Year 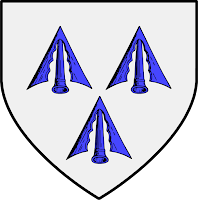 The Free Kingdom of New Doltria


5581 – The King commissions cyclopean gold-plated statues to commemorate the birth of the Queen’s child, Alys Mucklemelon, and places them along the old bulwarks built during the Second War. The statues are highly enchanted, and cause crops they gaze upon to fail. The area becomes known as the Golden Badlands.

Littlesock. An ancient halfling city in the savannah, Littlesock is currently suffering from depredations by hungry giants. Livestock has been vanishing at an alarming pace, and the town elders are desperately calling for aid.

The Wastes of Solace. Once a place of worship and reflection dedicated to the myraid small gods of the desert, the Wastes have since become a highly commercialized tourist trap. Its major attraction is the village-sized colossal statue of Paldor Kruum, the titan of mystery, tipped on its side after standing for untold aeons and being slowly scoured clean by sun and sand.

The Pools of Incense. Here, geysers spew fire from the ground at regular intervals, and the resulting chemical clouds can be mined for rare arcana by those with the knack.

Frostchapel. A holy city so-named for the enchanted crystals which sometimes grow amid the plains and radiate an aura of supernatural cold. Frostchapel is currently suffering raids by the so-called Faceless One, a demonic entity from the Witch Wastes who charges into battle alongside a rabble of berserk minotaurs.

Hardgreen. Ulver's capital city and home to the Emerald Palace. Hardgreen's population fluctuates, as treaties with the lands to the south have encroached upon its ancestral sprawl significantly, so that some residents of Hardgreen are no longer technically part of Ulver proper. Even so, it is home to 160,000 souls, and the largest city in Ulver by a significant margin.

Beosigskill. This small, unremarkable town would remain so were it not for the recent arrival of a grove of living saguaros. They have taken over the town and are forcing the humans there to live a more plant-like existence. Some have taken to it with aplomb; many of the town elders have not, and are urgently pleading for help.